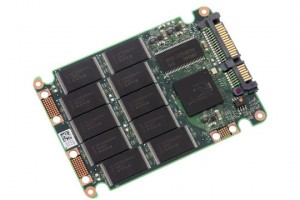 Solid State Drives (SSD) are becoming a widely used tool for storing information on a computer and are slowly replacing many mechanical hard disk drives (HDD). There is no 100% right answer to the question of purchasing a SSD or HDD until you fully understand both the pros and cons of a SSD and HDD. With this comparison one should be able to conclude if their system should be housing a SSD or HDD.

What is an HDD? HDD have been around since the mid 50s and are still used in most computers today. Information is stored on a disk that is spun around at incredibly fast speeds of up to 15,000 revolutions per minute (RPM). In most cases, the higher RPM means the HDD can read/write information faster. Information is stored on the disks using magnetism by an arm that hovers over the disk. This arm reads stored information and also writes new information on the disks. These are the basic mechanics of how a HDD works under it’s shell.

What is an SSD? An SSD is very different from an HDD. It has no moving parts unlike a HDD. This is the main reason which makes SSD so much faster than  HDD. A SSD can be seen as multiple thumb drivers put together into an “ultra thumb drive” that is much faster and stores more information than most thumb drives. SSD use microchips to store information quickly; this technology is called NAND-based flash memory and is used in almost every SSD. This information can be accessed almost instantaneously depending on the brain or controller of the SSD. The brain communicates with the microchips to quickly gather the requested information, whereas, the HDD’s arm has to read the data from a disk that may be stored in several locations on the disk.

Which is right for you? The first concern is the cost of the storage device. Even with the price of SSD dropping; it is still the more expensive choice. With SSD starting at around $120 dollars for around 250 gigabytes, whereas, a 2 terabyte (1024 gigabytes) cost around the same price. This is the main factor that HDD have over SSD. If you have no concern about the boot time of your computer and enjoy always having more space to save movie clips to school documents, an HDD is right for you. “But Chris, can’t you just get a 2 terabyte SSD?” The answer is no*. The largest consumer SSD on the market cap out at about 1 terabyte, but cost $450-600. If you are willing to pay for the faster performance and don’t mind the limitation on the about of storage – then get an SSD. There are other nitpicky reason to buy an SSD like no noise/vibration, lower wattage, and being magnet proof. Overall the main benefits from SSD are their speed.

There is no right or wrong answer when choosing your storage device; try to think about what you will mainly use your computer for and choose. “Chris, do I have to pick only one?” Again, the answer is no. You can use a combination! Many people buy a small SSD for their boot drive and select documents while storing mass information on HDD. “What if I already have an HDD as a boot drive and want to replace it with a SSD?” You can do that by re-installing windows or using 3rd party programs to clone the information for you.

As of writing this Article; consumer SSD’s are not sold in 2TB formats

This entry was posted in Hardware. Bookmark the permalink.
Loading Comments...