To make a time-lapse video in Ubuntu, we needed to gather many photos to compile into one video. To achieve this, I had to use the program avconv which runs from the terminal. The program is an audio and video converter that is pre-installed on your student laptop. I created a script and looped it so it takes photographs every few seconds. 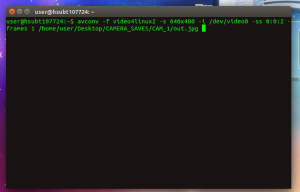 The command to capture photos is:

If you have more than one camera plugged then change /dev/video0 to video1, video2, etc.

You can also export the file to another directory as the desktop, just keep the file extension and file name. 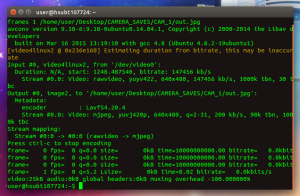 This command is useful but there is one issue: when a photo is taken with this command, the original photo is over written. To create a time lapse, multiple photos need to be produced and merged into a a video editor to produce a time lapse video.

The script has been created to export a different file name every time the time changes, the output file is listed in seconds. Bash script download link here which can be edited for your needs: Script download

Enter the following command from the terminal with ./takepic_cam1.sh being the location of the script file. Replace 5 with the interval to take photos

The bash script can be edited by using the nano command:

After letting the script run for about a day and a half taking a photo every 5 seconds it had generated about 11,000 photos. 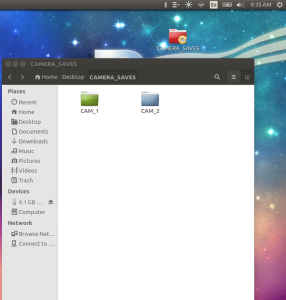 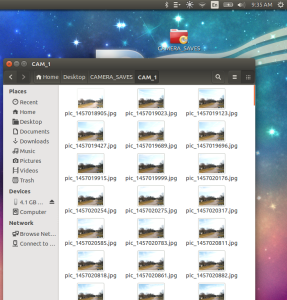 All the files can be exported into a video editor to create a time lapse video or a animated GIF.

imgflip.com was used to create the gif.

This entry was posted in Applications. Bookmark the permalink.
Loading Comments...