To learn about Raspberry Pi and see some other creations, listen to the link below by Sudo Chat!

Raspberry Pi is a $35 mini computer. They’re portable and can be used for smaller projects that cannot use a bigger system. Different projects have been tested and created using Raspberry Pi’s because the Open Source software allows the user to easily control and manipulate the codes. It allows a arrange of ideas to be formulated from the daily lifestyle to even putting a Pi in space.

There are a few builds out there for making a Raspberry Pi-powered computer setup, from the quick and easy to the more expert-level projects. This one by Michael Davis for an all-in-one desktop computer is on the easier end. It has a short list of needed materials and lets you put an old monitor and keyboard to use. The Raspberry Pi gets strapped to the back of the monitor, letting it go incognito. ~ Mother Nature Network

This build marries two of our favorite things: DIY gadgets and solar power. Instructables userhackitbuildit shows you how to run your Raspberry Pi off of sunlight with a solar panel, a car power socket, a USB car power adapter and a battery. ~ Mother Nature Network

This project involves a little woodwork on top of some computer engineering, but the result is a DIY Raspberry Pi-powered arcade table that lets you play your favorite old-school arcade games or use it for Web browsing and writing emails, displaying photos or social media updates. ~ Mother Nature Network

When Red Hat visited us on April 14, 2016, they came with a Raspberry Pi powered cosplay of the transformer Soundwave. She programmed retro games, a photo booth, sounds and images to be played with the press of a button and using the Raspberry Pi/ Open Source programs. 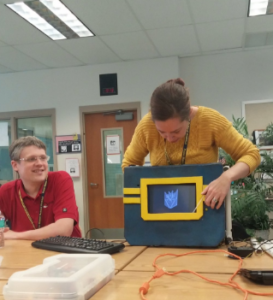 This entry was posted in Other, Tech News. Bookmark the permalink.
Loading Comments...