Work hard and keep your options open; that was the motto from today’s Career Seminar Speaker.  Captain David Shipley visited Manor to share his life and career experiences with the 7th and 8th graders who chose to participate.  The Seminar covered a wide variety of topics including the education and training to become a pilot, the day in the life of a pilot, and career prospects. 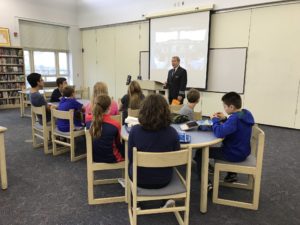 Captain Shipley earned a degree from Embry-Riddle, an aeronautical university, then made his way to the Air Force where he was an Pilot flying a variety of aircraft including the F-117 Stealth Fighter.  Serving in combat situations mainly in the Middle East was a part of his in the military service.  Currently, he is a Pilot for American Airlines flying many Trans-Atlantic flights (he left us to fly to Paris – what a great field trip opportunity that would be!) 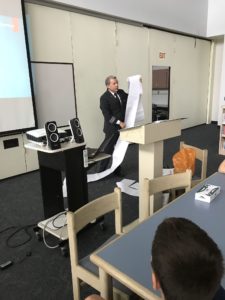 Captain Shipley detailed the amount of work that pilots must complete prior to even getting into an aircraft.  The pile of paperwork generated from a single flight rivals a teachers!

Although many of the aircraft systems are automated, pilots need to know a great deal about all of the systems and procedures.  They go through specialized training for each and every type of aircraft they fly. 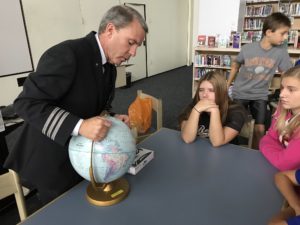 During the portion of the talk that detailed the technical aspects of flight, we discovered The Great Circle Route.  It explains the curvature of flight paths and how this can make flight time shorter.  Then we discovered what the contrails behind an airplane actually are composed of (it’s cloud like material – not pollution or toxins). 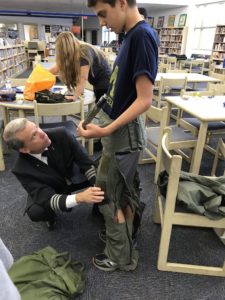 Learning about being a combat pilot was also a highlight.  Students had the opportunity to try on a real flight suite and flight helmet.  Above, Colin is learning about the pressurized legs in a flight suit.

Students also loved learning how to prevent G-LOC (Gravity Induced Loss of Consciousness) when flying in extreme conditions with the practicing of the Anti G Straining Maneuver.  Ask your child to demonstrate and teach you.

There was so much more to this wonderful talk – ask your child to share what else they learned.  Flight lessons may be a birthday present request for some.

Thank you, Captain Shipley, for spending time with us today.  All of the students learned a great deal from your experience and expertise.

Captain Shipley and his daughter, Erin. 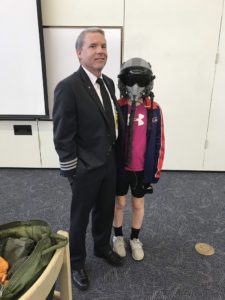 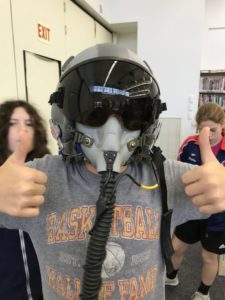 Roman and Elena tried on the flight suit too. 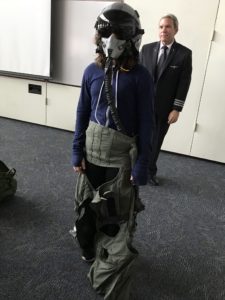 Hambright students have been working on The Global Math Project ‘s Exploding Dots activities this week and last week with over 1.4 million other students from 84 countries.  Exploding Dots allow students to explore numbers, place value, number systems, and standard algorithms.  All of the classes seemed to enjoy deepening their understanding of math, “exploding” the dots, and loved the idea that they were playing with other students from around the world.

Manor Middle kiddos have the link in Google Classroom to try it for themselves.

A great new opportunity for all of my students interested in coding: 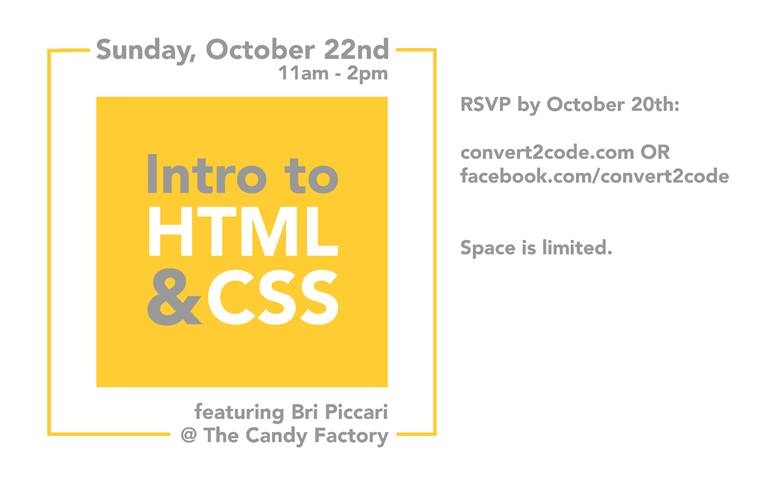 All ages, grade levels, and ability levels are welcome. Space is limited, so those interested should RSVP by October 20th.

Questions about the organization or event can be directed to Convert to Code at: converttocode@gmail.com.

What is Super Saturday?

Participants choose three 45-minute kid-sized seminars from a diverse
selection of topics. Past programs have included robotics, animation, theatre, Chinese language, reptiles, creative writing, LEGO machines, the
cardiovascular system, and electricity, to name but a few. There is something for everyone. A parent presentation is also offered.

Check out this article from LNP about our 2013 event: http://bit.ly/2vxnelB
In 2017, nearly 300 gifted elementary students from Lancaster County and the surrounding area attended Super Saturday. The event filled in less than a week.

The next Super Saturday will be held Saturday, March 17, 2018 from 9 am to noon at Franklin & Marshall College.

Details, including online registration information, will be posted in early
January at www.lc-page.org and on Facebook at
www.facebook.com/LancasterCountyPArtnersForGiftedEducation.

Celebrate the start of the 2017-2018 STEM Sisters programming year at the STEM Sisters Launch Party at Rock Lititz Pod 2 (100 Rock Lititz Blvd, Lititz, PA 17543).  Girls in grades 6-12, their parents/guardians, and female STEM professionals are welcome to join us in the unveiling of new program opportunities and the discovery of STEM all around us in Lancaster!

Activities at the Launch Party include:

Register for the Launch Party

What is STEM Sisters?

There are two events this month for LC PAGE:

Do you worry that virtual reality is becoming your child’s reality? Do you struggle to balance your children’s desire to play video games with other pursuits? How much is too much? This session shares a close-up view of what the research is telling us about best practices for families in the digital age. You’ll learn the tips and strategies you need to hack parenting the digital native.

The program is free but space is limited. Registration is requested.  Register here:  https://goo.gl/forms/SDrVtpMdmzqrR7ww1

Who is the Gifted Guru?

My real name is Lisa Van Gemert (pronounced “gammert”). I’m an educator by training, and I’m a Giftedland native – I was a gifted student, I’ve raised three gifted kids, and I’ve taught gifted students. The gifted trifecta! I’ve been a teacher, a school administrator, a homeschooling mom, a paralegal, an Army Intelligence Analyst (yep), and a cheerleader. Not in that order.

After Hours at the
Lancaster Science Factory

Join us for an evening of hands-on science. Lancaster Science Factory volunteers will be on hand to answer questions. LC PAGE board members will have information and resources for your burning questions. Pizza available (while it lasts!)

Friends and family are welcome. Pre-registration is not necessary but helps us plan for refreshments and speeds registration.
Register here: https://goo.gl/forms/mATVIbYXbtZQ0Ze83