We started Discover at Hambright and Gifted Seminar at Manor over the last few weeks.  Students are settled into a more structured day now that all of the Back to School information and meetings have finished.  The kids are busy meeting new friends – especially at Manor – and strengthening prior friendships.

Your child should have brought a letter home to you (yellow for Manor and green for Hambright) with a general overview of the year.  Please feel free to reach out if you have any questions.  Thanks to those of you who have subscribed to the blog. 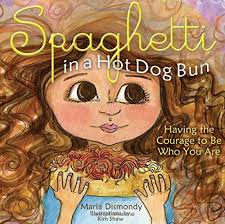 The elementary kiddos have also had time to break out some of the new STEM equipment and work together to construct a new robot. 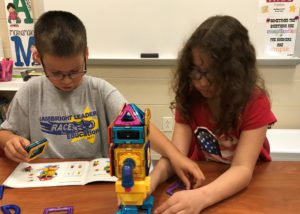 Manor has started with some team building fun!  We are working on forming strong cohorts in Gifted Seminar.  I happy to see the 7th graders expanding their friendship circles since there are four elementary schools coming to Manor Middle.  The 8th graders are also catching up with each other and forming new bonds because I mixed up their cohorts from last year.  You can see they still love to be silly together.  It’s good to have people in your tribe that understand you. 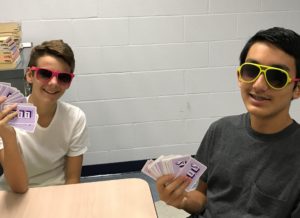 The 8th grade ladies are already checking planners to make sure they stay on top of their work. 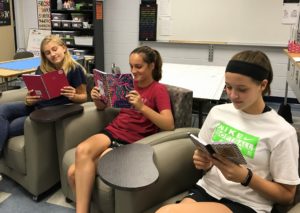 Be on the lookout for another blog post tomorrow about our Speaker Seminars.  I would love your help!

Hambright students in grades 4-6 attended the Millersville University’s 31st Annual Brossman Foundation and Ronald E. Frisbie Science Lectureship last month.  Millersville University kindly extends an invitation each year for area students to attend the afternoon presentation by the speaker highlighted at the Brossman Lectureship Series.  It is a chance for elementary, middle and 9th grade students to visit the Millersville campus and hear directly from an expert in the STEM community.  At the close of the presentation, students have a chance to ask questions to the presenter and hear questions posed by their peers.

This year’s speaker was Christine McKinley.  Her topic was: The Feeding and Exercise of Your Brain.

Christine McKinley told students to dive headfirst into subjects that are most difficult for them. She explained that while their brains are growing, this is the time to tackle math, science, writing, and music. She shared that math and science were the hardest subjects for her in 7th and 8th grade.  To her surprise, trigonometry, chemistry, and physics were her favorite classes in high school. She then got a degree in mechanical engineering in college while playing bass in a band. Christine encouraged the scientific students to think like artists and the artistic students to think like scientists to get the most out of their amazing brains.

Other than the rain, I think the students enjoyed the time away from class to attend the lecture. 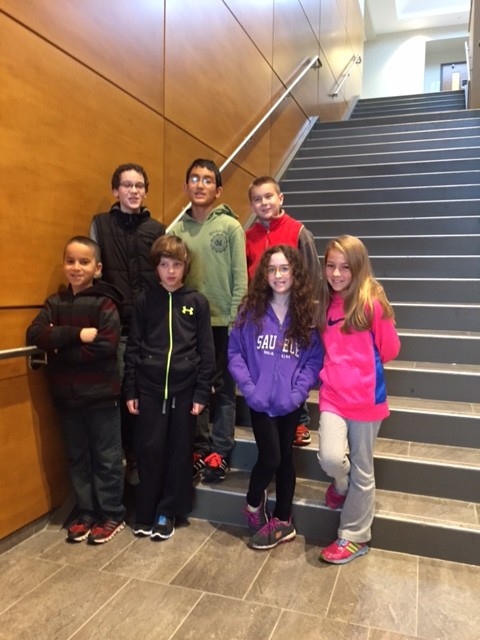 Have a wonderful weekend. 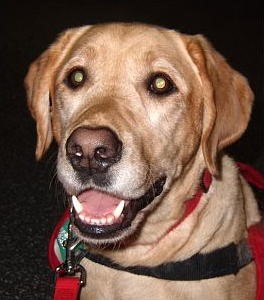 My name is Walker, and I’m so excited about the great news I have for everyone.  I have been at Manor Middle School for the last 10 years and am looking forward to begin working once again this school year.  I will be in the building a few days a week for the remainder of the year.  I was born in April of 2005, and I have been training in the New Life Assistance Dogs (NLAD) through United Disabilities Services program all my life.  I can turn lights off and on, open doors, retrieve and return things like books, back-backs, etc.  I’m also a very good listener and can’t wait for the students to read to me.  Other note worthy characteristics about myself include: a gentle and willing temperament.  In addition, I am in excellent health and fully socialized.  My primary service will be working with the academic support team.  Nonetheless, some of you may see me in the hallways, library and other places throughout the building.

I will be wearing a red vest to indicate that I am a fully trained service dog.  This is different from that of my fellow canines who are still in training.  My friends’ vest will state that they are Dogs In Training “Please Do Not Pet.”  My friends are so jealous of me because my human friends can pet me.  Although I love human interaction and attention, please, please ask my Master for permission before petting and/or giving commands, for this could confuse me and I would not want to be a distraction in the educational process.  I will have several trained faculty members who will help me be successful in my placement here at Manor. If you have any questions, please feel free to contact Dr. Edwards or Mr. Kramer.

I am so happy to finally get use my gifts with so many great people at Manor Middle School.  It will also be great to go to work with my human daddy, Mr. Kramer (Health & Phys. Ed).  Can’t wait to see some of my old friends and make some new ones.

Welcome back, Manor and Hambright students!  I am so happy that I’ve been able to see so many of you.  You’ve grown, you’ve had wonderful, fun-filled summers, and now it’s time to start another year in your education journey.

I have some information for you that is divided by school.  Please read over and email me with any questions.

I sent a letter home with each student on Thursday detailing our schedule for the year, our curriculum, and a permission slip.  Parents – please sign the permission slip as soon as possible and have your child return it to their teacher.  If you need a new copy, let me know.  Classes will be starting next cycle; our first date will be Thursday, September 17th.

I am using Google Classroom to communicate with the students.  I have posted questions, a survey and some other items.  If your child hasn’t accepted the invite to the Discover Google Classroom, please have them do so ASAP, and complete the survey.  I am trying to set-up our first meeting of the year with the information the survey provides; we will be talking about Gifted Services this year.

The Essential Brain: 10 Things Everyone Needs to Know about the Brain

Nationally renowned speaker and Gifted Guru Lisa Van Gemert will share this presentation with parents and children of the Lancaster County area.

What are the most vital things everyone needs to know about what research has to say about the brain? Mensa’s Youth & Education Ambassador will share ten key things you need to know to be in the know. Discover why kids under stress can’t learn and how to help. Uncover the science behind giftedness and what it has to tell us about typical learners, too. Learn the key structures of the brain important in learning (and why one of them is causing fights on campuses and in families).

While this program is free to all comers, space IS limited.

Please RSVP by Monday, March 16. To RSVP and/or ensure your question is covered: contact Alrica Goldstein at 569-5265 or lcpagepresident@gmail.com. Current members will be entered in a raffle.

Earlier this morning, I announced to the Hambright staff that during the March 16th School Board Meeting, I will be recommended to fill the Assistant Superintendent of Elementary Education in the Penn Manor School District.

This new appointment will be bitter-sweet for me.  Hambright has been my home for close to nine years.  The connections I’ve made with all of you and your children will be forever remembered.  However, I am not saying goodbye.  I am looking forward to serving the Penn Manor community in a different capacity.

Below is the statement Dr. Leichliter shared with the community this morning:

After completing the search for Assistant Superintendent for Elementary Education to replace Mrs. Vickie Hallock’s position due to her retirement, I am pleased to announce that Dr. Jerry Egan will be recommended to the School Board on March 16, 2015 for appointment to the position.

Jerry has been a teacher and administrator in Penn Manor since 1999.  He has served as an elementary and middle school teacher, Twilight alternative education instructor, middle school assistant principal, and elementary principal since August 2006 at Hambright Elementary. In addition, Jerry is a Penn Manor resident, has a wife who is an elementary teacher, and two sons who are both students at Eshleman Elementary.A special thank you to the following individuals who served on the interview panel for taking time out of their schedule to devote to this important interview process:

I will keep you informed of information about how the school district is going to fill my position here at Hambright.

The students entered the Sumdog.com Holiday National Math Contest that took place December 12th – 18th.  There were 19,522 classes registered with 8,646 classes qualifying.  Our class of 11 (Grades 2-6) finished in 591st place overall in the nation, but we finished in 39th place out of 559 Pennsylvania schools that participated.

Even more statistics:  there were 197,009 students who answered 47,985,561 math questions.  That is incredible!  The Hambright students did a phenomenal job considering most of them had limited time to participate.  There will be more chances both locally and nationally for us to compete.

Hambright Students – you did a fantastic job today during our #HourOfCode.  I am so impressed with how many lines of code you wrote and how you collaborated with each other.  I saw your excitement.  I had to send you back to class when you really wanted to stay and code some more.  Let’s keep this going.

“I want to be a computer engineer when I grow up.” 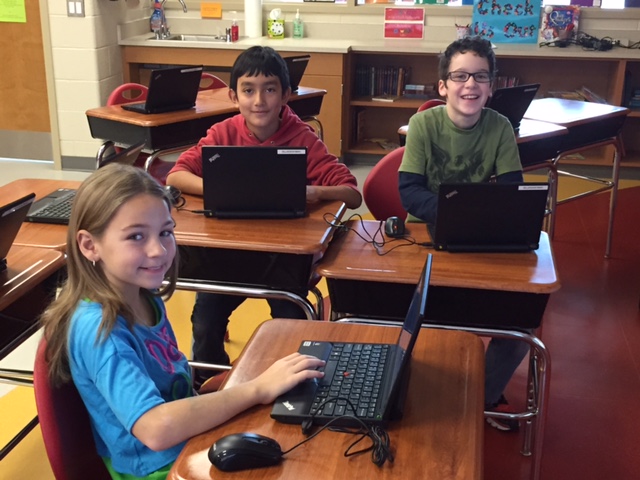 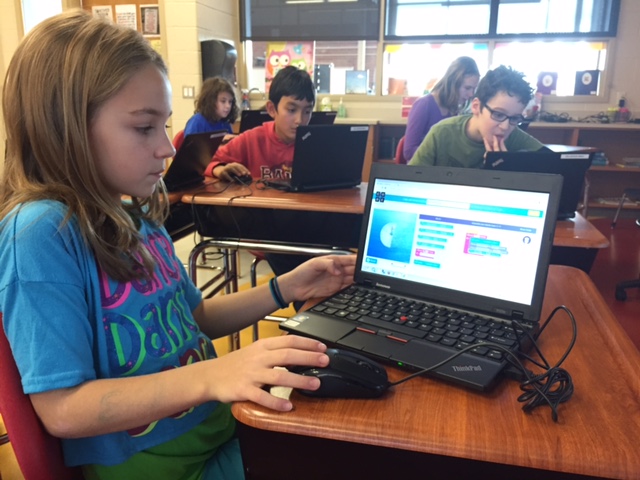 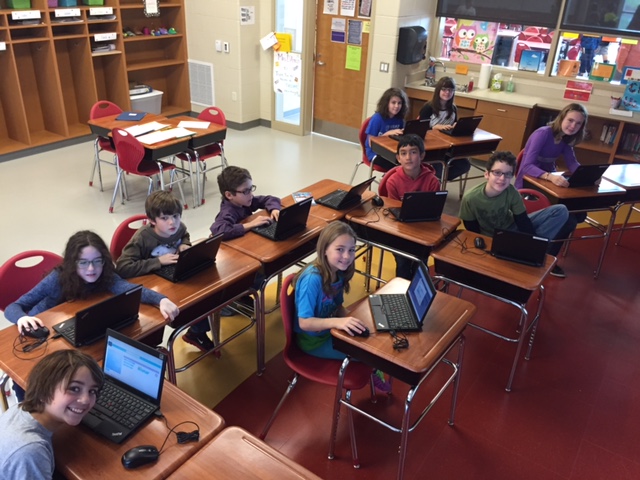 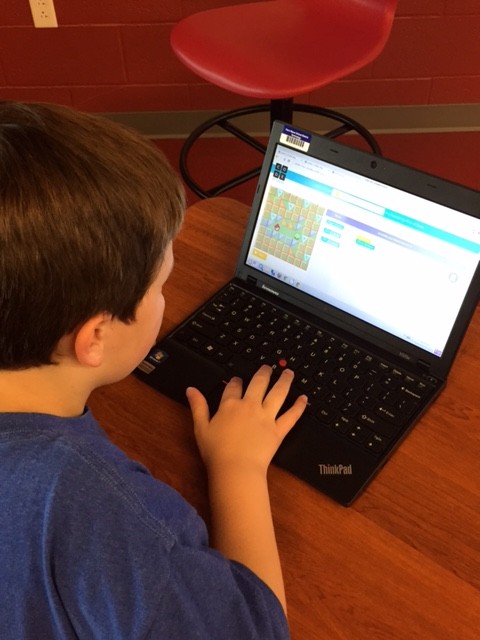 Here are the links that we used today:

There’s so many fantastic sites and apps available.  Google what’s out there for your child and your technology.

This is what they left me with yesterday; meet Bobby Jo and Sir Fabulous.  Love that they love our own room and are making it a home for us. 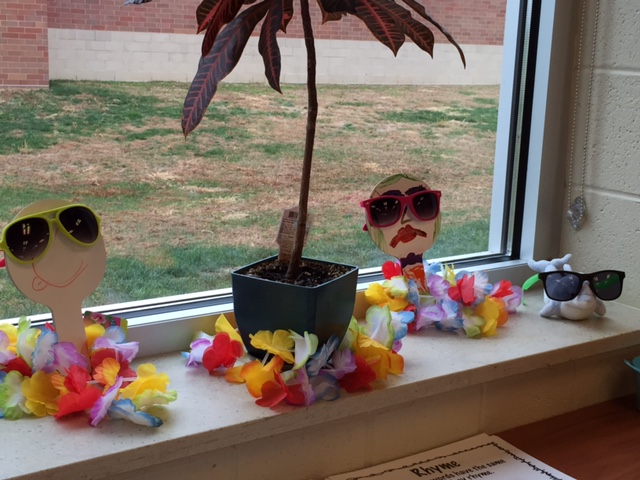