In 1936, the world was beginning to fall into shambles. Hitler, a failed Austrian painter, has risen to power in the now called German Reich. The Great Depression is affecting all nations in trade and citizen living. The Soviet Union is breaking as Joseph Stalin is unable to get the idea of Trotzky out of the minds of his people and officials. In Asia, Japan is angering many nations including, but not limited to: China, Soviet Union, French Vietnam, Mongolia, Australia, and more. In the Balkans, Greece has forced Bulgaria to have a limited Military, Yugoslavia is having issues with Italy, and Romania is surrounded by enemies.

All of this set the mood for all the nations and their leaders. It set a changing mood where each nation would have an effect on each other whether they know it or not.

With all this confusion, this gave one man the total power and cover-up he needed to take over the world. Agent-Isaac became leader of Turkey through the power of he said so… Whether or not this was better or not for Turkey remains to be seen. END_OF_DOCUMENT_TOKEN_TO_BE_REPLACED

We are the ones that they call the rebels

We’re the ones who stood up to rebel

We live for the broken hearts

Not watch them fall apart

We are here and we’re bullet proof

The world wants to see courage and we are the proof

It’s time for us to fight until we die

So that we don’t have to live under a lie

Right now what we can only hope for another sunrise

But after that we can only reprise

We stand at the gates of hell

Place your hand on the big black book, and know what you’re fighting for

Just remember, this may not be your city of dreams

But it’s your city to live for 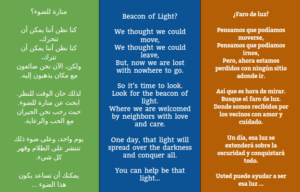 It was a cold, winter night. The fog in the air made it almost impossible for people to see in front of them. This weather was specifically chosen for the kind of operation going on tonight. The kind of business today needed pure stealth, and the fog not only gave them this stealth, but also stopped their target from being able to go anywhere. The Agent Squad was on their mission…

The mission was simple, but crucial to the protection of the world. Their job was to collect a nuclear heat bomb, which didn’t explode like a nuke, but would set a huge heat wave off that would first make a certain area hot, then force it into a chilling -10℃. This would force the British into submission, giving the Irish full control of the British Isles. Normally, this would just be a civil war, but the Irish began to use dangerous weapons against the British. This was no longer a civil war, it was a war of genocide on both sides.

The saddest place is syria.

It is the worst area.

It should be peaceful,

But it is more hateful.

It would make you cry,

Or maybe even mad.

Or just a little bit of money.

They would love to be here,

And they would be happy and cheer.

What it’s all about: This poem is based off of the horrible disasters in Aleppo, Syria. Sadly, at this time there was war  happening, and all the beauty was destroyed. The perspective I had on this poem is: what if you went back to a place you knew and loved, and found it ruined. All you have to hold on are what you remembered. Hints the name of the poem “How I Remembered It” . As you read this poem, think of your favorite place one day only to find it destroyed the next. I will leave you with this one burning question as you read this poem. How can I help?

that I had come to know.

A place where the

laughter and enjoyment are

heard from every corner.

to the new flowers that bloom differently every year.

Too bad the flowers won’t get a hello this year, or the next…

Sadly, there will be no flowers or architecture,

there will be nothing at all.

There was more rubble, sadness, and war.

What once was beauty, is now ruined forever.

The sound I hear now are cries and screams for a better day.

There is nothing left

All hope is gone

Ivan was a jolly man, normally. He was a big man, and usually had a smile on his face that ran from ear to ear. He had a roarious billowing laugh that would fill his hall with a noise like an avalanche. But today was different. The jolly ginger king that had a beard to his belly button had no smile today. His cheeks were not red from the consumption of his hand made dwarf ale, and there was no laughing. As he hurried down the corridor he murmured to himself, “No it can’t be, not yet! Not now! He couldn’t have broken the oath of peace so soon, and just as my men were sent home for harvest!”

As he passed through the halls of his palace, a small bald dwarf covered in tattoos stepped out of the shadows. He was a taller dwarf, with thick arms and a well built body, his arms and face were dotted with the scars from past battles, and his left eye socket was covered with an eye patch to keep infection out. He followed Ivan closely as they stepped through the doors and into the sunlight.

“They have been outside for hours.” The bald headed dwarf said.

“They haven’t done anything but stare at us Dwelmare. They are just trying to coax us into battle. And if it was up to you they would succeed. ” Ivan shouted over the roar of a sudden and powerful wind.

“Ivan, you have grown ignorant since your victory at Brommel. Has the thought crossed your mind that maybe they are just staring at us because they are waiting for something. I advise you to call in your forces. If they were here, we could have a battle ready army by tomorrow. “

” I know I know. Alright. Send my courier to the house of every warrior in my kingdom: Be here tomorrow, or face death on the grounds of cowardice. ” Ivan shouted knowing his men would hate him for cutting there well deserved holiday a month and a half short.

“What about us?” a small fair haired boy with a well built body and dark thunderous eyes spoke up from behind one of the three banners that sat on the perch that Ivan and Dwelmare were standing. “ What if they attack before our forces get here? Dad are we gonna die? I don’t want to die I want to live. ” the boy screamed as he worked himself into an uncontrollable fit of fear.

“ Son nothing is going to happen now go back inside and train, one day the king will call on you like he is calling on his warriors today, and when that day comes you will need to be ready. So go train and let the king have some peace. He is very stressed at the moment.” Dwelmare said firmly in a soft voice that made the child feel loved.

“But father…” The boy stammered before being cut off.

“Welamere, now, or I will make you eat with the dogs tonight.” Dwelmare shouted at his son.

“ Yes dad.” Welamere said as he shuffled away to the castle to continue his training.

“Oh come now Dwelmare, the boy is scared, can’t you see? Let him come and here our talk, he will need to know if he is to be the next kings assistant.” Ivan  said as he ushered the boy back to him.

“Ohh yay!” the boy exclaimed as he ran back to the king who was waiting for him with open arms.

The boy was just jumping into the kings arms as blood splattered the kings face, and the boys limp body landed in his hands, a long stick protruding out of his skull like a tree from the ground, and a razor sharp metal object slicing a shallow gash across the kings eye.

“ Noooooo!” Dwelmare shouted as he took the limp, lifeless body of his son from his king, tears rolling down his face. “ You fiends, you know not what you did, you have just unleashed hell, and the demons within its bosom will fall over you like the waves of the Zhuf.” He yelled as he laid the lifeless corpse of his son on the ground, as gently as if he was laying a baby down for a nap.

After he laid his son on the ground at his feet, Dwelmare pulled his sword from its hilt, and ran it down the length of his palm.

“I swear to the gods that the army who has taken my son from me will pay dearly, in men, in riches, and in the burning of their homes, each and every one of them will die!”

“Dwelmare,” I van said in a kind but firm voice, “You will have your revenge, but you will wait until our army is battle ready. And you will wait for my signal to attack, do I make myself clear?”

“Yes king.” Dwelmare said as he wrapped his hand in a torn off piece of his shirt.

I woke up by the sound of gunfire. I grabbed my rifle and walked outside the tent and realized that our camp was getting attacked by a group of Taliban. I ran to the closest cover I could find and found my self around the dead body’s of my best friends. They were torn apart by shrapnel. I couldn’t think about the situation fast enough because before I knew it bullets were hitting the wall I was behind. I tried returning fire but there was to many of them before I knew it I found a Taliban soldier pointing a gun right at my head……… TO BE CONTINUED.

June 6th, 1944 its 7:00 AM, soldiers are sitting in a boat cruising into shore, awaiting their arrival on the beaches of Normandy. Its dark, rainy, cold possibly and soldiers know their own fate. When that door opens their marching into enemy territory putting their life on the line, but for what? The country? they are on the shores of Normandy and, they can see the bunkers at the top of the hill machine guns staring every soldier in the face waiting to claim them. with In 5 minutes they are either dead or alive this depends on them and shooting or the speed of dodging a bullet.

They’re nervous, they are all shaking, and wondering how they got into this. But most of all They’re  wondering what caused all of this? Who is responsible for sending us here or even shooting at me? All these questions rushing into their head. They can’t focus. There is now only one minute till they land. If there not focused they will be dead! They are trying to clear their minds of all this nonsense when suddenly the doors open and they rush out and bang. floating in the water bleeding more cold then they have ever been in their entire life, when suddenly it goes black and they are dead.