There have been many successful PM throwing athletes who have or are currently participating in NCAA sports.  Any updates or meet information can be placed here.  We’d also love to hear about your NEW personal records!!  Good luck alumni! 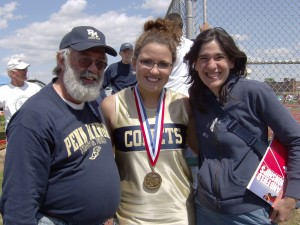 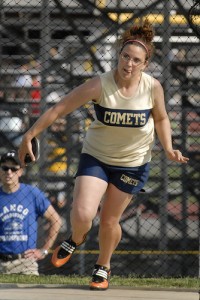 Alie was a two-time state finalist in the discus.  She broke the Penn Manor High School record numerous times and currently holds the record with a throw of 140′ 10″.  Alie was a two-time Lancaster-Lebanon League Champ and she was also a PIAA District Champ.  Alie was also named on the 2008 Coaches All-Star Teams in the Discus.  Read some of the articles written on Alie while she was a high school athlete: http://blogs.lancasteronline.com/jeffreyreinhart/2007/05/19/very-very-lucky-penn-manor-standout-captures-district-3-discus-gold

In the second and final day of the DIVISION I Southern Conference (4/25/10) ALIE GIRVIN TOOK THE CROWN IN THE DISCUS WITH A NEW PERSONAL RECORD OF 145′ 3″!!! She is just inches off the school record (which is 145′ 7.64).   ALIE also threw a new personal record in the HAMMER breaking her own school record by over 13 feet!  The new hammer record at ELON is now 142′ 3″ held by Penn Manor’s own Alie Girvin! 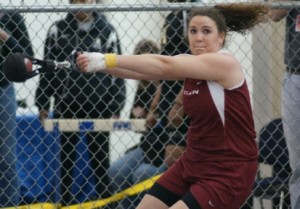 As of February 2012, Alie also set the school record in the weight throw with a toss of 48’8.25” (!!!)  She holds the HAMMER RECORD, THE WEIGHT THROW RECORD and she is just inches off the DISCUS RECORD!!

See the ELON page for more…

CHECK OUT DEREK’S NEW PERSONAL RECORDS in the jav 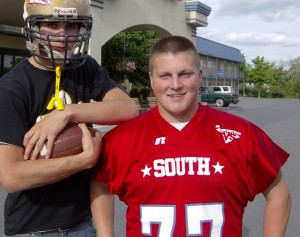 Ben broke the school record in the javelin in 2008.  Although he was welcomed into West Chester’s Track and Field program, Ben’s first choice was to play college ball.

Andrew was a multi-event athlete and particpated in hurdles, high jump, and the throws.  He was a finalist in the conference and qualified for the PIAA District meet in 2008, 2009.

ANDREW is doing well in 2011: Check out this update!!  ANDREW SCORED MANY POINTS AS A MULTI-ATHLETE!! 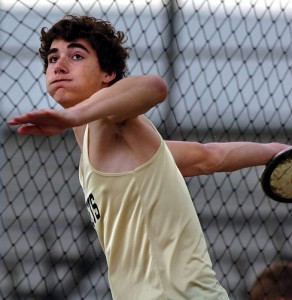 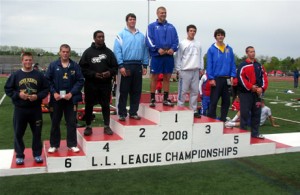 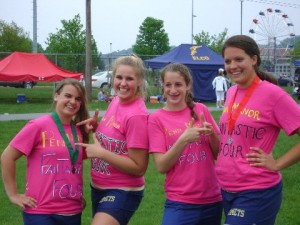 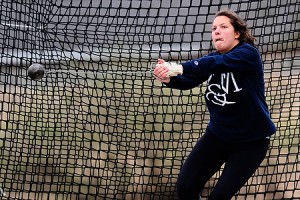 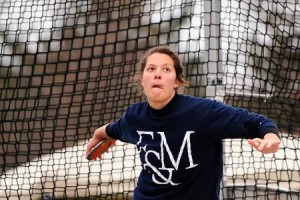 While at Penn Manor, Eric met the national silver standard in the javelin.   He was among four other athletes who could throw over 150′ in the javelin his senior year.  Even though Klugh is also a strong part of the football team at McDaniel, we are glad to see he is still throwing the javelin!  Here are some of his college results

Justin was seventh in the conference in the javelin/Lancaster Lebanon League, 2010.  Justin qualified for the PIAA District meet as well. Justin’s best throw in the javelin – 170′ 2″ also broke the senior class record and met the national silver standard.  Here are some of his college results

Pictured above: Eric Klugh (left) and Justin Diffenbaugh (right); both gentlemen are throwing javelin at their postsecondary schools

Carenna was the 2010 Lancaster Lebanon League Champion in the girls discus (Carenna placed FIRST at the conference meet and just one year earlier, she placed eighth as a junior -2009).  As a senior, Carenna also placed fifth in the discus at the PIAA District meet.  Carenna was also a state-qualifier in the discus and she met the national silver standard multiple times.

We are glad to hear Carenna is doing both field hockey and the throws at Ship!  Here are some of her college results or look here

JUST IN!!! GREAT NEWS!!  CARENNA HAS EARNED A SCHOLARSHIP IN TRACK AND FIELD FOR HER SOPHOMORE YEAR 2011-2012!!  In addition to her field hockey scholarship, Carenna will now be getting funds to throw as well!