Congratulations to the 2020 Inductees for the Distinguished Alumni Wall of Honor! POSTPONED.

Four Penn Manor alums will be honored with the Penn Manor Distinguished Alumni Award in April. The recipients are Elizabeth Maine Allen, Class of 1974; William Myers, Jr.; Class of 1976; Charlie Reisinger, Class of 1990; and Tiffany Harrington Harris, Class of 1991.

Elizabeth Maine Allen, CPA – Class of 1974. Liz participated in field hockey, gymnastics and band while in high school. She earned her Bachelors of Science in Health Planning and Administration at Penn State and played field hockey for the Nittany Lions. She earned her MBA from the University of Pittsburgh. Liz has spent over 40 years as a healthcare executive. She was the first woman partner in the Pittsburgh office of Ernst & Young and the first woman Chief Financial Officer at both Trinity Health System and Allegheny Health Network. She has served on a variety of Boards including non-profit organizations and advisory groups. Along with her brother, they established a scholarship in their mother’s name (Kathern Janes Maine – a former teacher at Penn Manor High School) that is for Penn Manor students choosing to major in programs in the College of Health and Human Development at Penn State.

William L. Myers, Jr. – Class of 1976. At Penn Manor, Bill was a member of Student Council and placed first in the Bicentennial Youth Debates advancing to the district competition. He attended Clarion University and earned his law degree from the University of Pennsylvania. As an attorney, Bill has 30 years of trial experience and focuses on transportation and personal injury law. He has successfully argued before the U.S. Supreme Court and has been named a Pennsylvania Super Lawyer 13 years in a row. In 2017, Bill introduced his first novel A Criminal Defense. It reached the No. 1 ranking on Amazon in both the Kindle Store and the Mystery, Thriller & Suspense categories. He followed with An Engineered Justice and A Killer’s Alibi. His fourth book, A Criminal Justice, will be published March, 2020. Bill is also active in the Pennsylvania Innocence Project and with the Ronald McDonald House of Philadelphia.

Colonel Tiffany Harrington Harris, USMC – Class of 1991. Tiffany was on the basketball and track teams at Penn Manor and was treasurer of her class. She earned her degree in Psychology at Shippensburg University and received her Marine Corps commission in 1995. Tiffany served one deployment in Afghanistan and two in Iraq. She was the assistant chief of staff for the 3D Marine Logistics Group in Okinawa, Japan. In August, 2019, Tiffany took command of Tracy’s Defense Logistics Agency depot in San Joaquin, CA. She is the first woman to lead the 77 year old depot. Her decorations include the Joint Meritorious Medal, the Meritorious Service Medal (fifth award), and the Navy and Marine Corps Commendation Medal (third award).

Charles Reisinger – Class of 1990. During high school, Charlie was involved in the theatre program and was the Features Editor for the school newspaper, Penn Points. Charlie received a B.A. in Psychology from Millersville University, and an M.S. in Instructional Design & Technology from Philadelphia University. He has been employed by the Penn Manor School District since 1998 and serves as the Director of Technology. He leads educational technology programs, infrastructure, and systems in support of teaching and learning with technology. Charlie is an advocate and frequent speaker on open source principles in education. He is the author of The Open Schoolhouse: Building a Technology Program to Transform Learning and Empower Students.

On Friday, April 17, 2020, the experiences and successes of each recipient will be shared with students at an assembly at the high school in the hope that they too will continue the tradition and go on to accomplish great things following graduation.

We need your help! Do you know of a Penn Manor alumnus or alumna deserving of recognition?  Is there someone you graduated with who has found great success?  Chances are that you know someone who fits these criteria.  The selection committee choosing the members of the Distinguished Alumni Wall of Honor 2020 are interested in individuals who have brought recognition, honor, distinction and excellence to Penn Manor through their postgraduate accomplishments. Please take a few minutes to complete the nomination form for one such individual. We can’t wait to spread the word about the contributions Penn Manor Alumni have made!

Posted on July 15, 2019 by Cindy Rhoades
Posted in Uncategorized | Leave a comment

Each year, the 50th reunion class is invited to attend graduation and celebrate with the current graduating class. This year, the Class of 1969 attended a reception at the F&M Alumni Sports and Fitness Center prior to commencement and then watched the Class of 2019 receive their diplomas. Denise Morris Race (’69), celebrated with her granddaughter, Paige Marie Ireland Miller, who graduated exactly 50 years to the day that Denise received her diploma  (Denise is pictured front row, second from left).

Class of 1969 – Invitation to Graduation

On behalf of the Penn Manor High School administration, faculty, and graduating class of 2019, you and a guest are invited to attend this year’s commencement ceremony.  The graduation ceremony will be held on June 4, at 7:00 p.m., in the Alumni Sports Center on the campus of Franklin and Marshall College in Lancaster, Pennsylvania.

If you are able to attend the Penn Manor High School commencement ceremony on June 4, please contact my office at (717) 872-9520, ext. 1809 or by emailing Cindy Bachman at cindy.bachman@pennmanor.net. by May 25.  Upon confirmation of your attendance, ticket(s) to the commencement ceremony will be mailed to you.

Posted on January 31, 2019 by mostrowski
Posted in Uncategorized | Leave a comment

Join us on February 13th at Lucky Dog Cafe on Columbia Avenue at 6pm as we plan future social events, identify ideas for our yearly newsletter, and address any new or old business. New ideas and faces are especially welcome!

Thank you Trio Bar & Grill for sponsoring the insurance!

The next PMAA meeting will be held at 6 pm on Wednesday, September 12, 2018 at The Barn Door, Millersville.  This year we are holding our meetings at Penn Manor area establishments and would LOVE to have you join us. Email PMAA@pennmanor.net to RSVP!   We will be planning for the October Homecoming festivities!  If you can’t make the meeting see you on October 5th at the PMAA Tent.

Congratulations to the 2018 Inductees for the Distinguished Alumni Wall of Honor!

Last evening, April 12, 2018, four deserving alums were inducted into the Distinguished Alumni Wall of Honor at a reception held at the Lancaster Tennis and Yacht Club. From left – J. Samuel Walker, Class of 1964, Joshua Herr, Class of 2001, Janice Mindish, Honorary Alum, and Craig Kauffman, Class of 1981. All four will be speaking to the students at the high school this morning sharing how their success is tied to their time at Penn Manor High School. 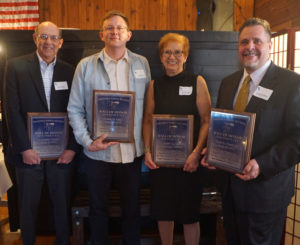